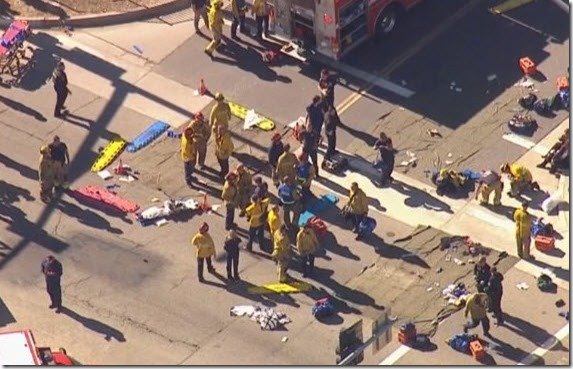 What is our take? This is a political move to bring about American involvement in Syria. With “boots on the ground,” worldwide organized crime, which has so enjoyed operating the American government through the GOP and its gambling boss moneyman, will be able to finally deliver that war with Iran and maybe one with Russia as well.

Can something as simple as a shooting have these implications? Then you must remember, this is one shooting, there have been others and we expect another one very soon.

After the shooting began, San Bernardino Police Department Lt. Richard Lawhead said that their SWAT team happened to be conducting training nearby. The team was suited, “ready to roll” and responded rapidly, Lawhead said.

Nearby police training was underway, response was fast b/c of that. https://t.co/2RirZrapiZ#SanBernardinoShooting pic.twitter.com/ANUautdtUA

What makes this noteworthy is that this is not the first time that emergency drills for the exact scenario unfolding were taking place at virtually the same moment the actual terrorist attacks began.

During the 9/11 attacks on the U.S., North American Aerospace Defense Command’s (NORAD) was in the midst of a training exercise called Vigilant Guardian, which “coincidentally” simulated planes being hijacked by terrorists.

Special Weapons and Tactics teams are police units in the United States that use specialized or military equipment and tactics. First created in the 1960s for riot control or violent confrontations with gunmen, the number and usage of SWAT teams increased in the 1980s and 1990s during the War on Drugs, and in the aftermath of the September 11 attacks. In the United States today, SWAT teams are deployed 50,000-80,000 times every year, 80% of the time in order to serve search warrants, most often for narcotics. SWAT teams are increasingly equipped with military-type hardware and are trained to deploy against threats of terrorism, for crowd control, and in situations beyond the capabilities of ordinary police, sometimes deemed «high-risk.» Other countries have developed their own paramilitary police units (PPU)s that are also described as or compared to SWAT police forces.

Barrett: I’m afraid that we may be seeing yet another false flag massacre like September 11, 2001, like July 7th, 2005 and like the two recent shooting attacks in Paris. It appears that all of these events and many many others are part of a program that’s called “Gladio B.”

It’s a continuation of the NATO false flag terror program that blue people often murdered people throughout the Cold War in Europe. It was run by the United States’ joint chiefs of staff. Today the Gladio B program is run essentially by the same people with the huge new input from the Israelis.

And they whipped the Western world into a hysterical Islamophobic attitude by recruiting and training people as “Islamic terrorists.” This particular shooting appears to have numerous extreme inconsistencies. We’re told that the terrorists twitted their allegiance to Daesh one minute after their shooting rampage began.

And if you think it’s a coincidence that an actual shooting just like the ones they’ve been drilling every month happened at this facility, I think you’re a crazy coincidence theorist.

«Witness Sally Abdelmageed, who works at the Inland Regional Center and witnessed the shooting in San Bernardino, was interviewed live via telephone by CBS Evening News the day the massacre happened.»

We saw three men dressed in military attire,’ she says. ‘I couldn’t see his face, he had a black hat on… black cargo pants on, the kind with zippers on the side… He had a huge assault rifle a lot of ammo…

She continues, ‘They opened up the door to building then he starts to, you know, shoot all over into the room – that’s the room we have conferences in…

You’re certain that you saw three men?’ the news anchor asks.
‘Yeah,’ she replies, as she continues to describe the THREE WHITE MEN, their muscular build, etc.

Mercenaries from the Craft International, a tactical training company for the US military, carried out last week’s false flag operation in San Bernardino, California, according to Steven D Kelley, a former NSA/CIA contractor.

Think about this. Two people shoot 35 people, and escape unnoticed the police. They then disappear for four hours. Then “a tip” informs the police of their whereabouts: two miles away from the crime scene.