“A distress signal was detected at 4:26 a.m. — about two hours after the jet vanished — in the general vicinity where it disappeared, Adel said.”

The China Times reported on 8th March that MH370 made a distress call that they would make an immediate landing because the “cabin faced disintegration.” The distress call was recorded by a US Navy listening post VTBU-Rayong at U-Tapao, Thailand.

Like with MH17 in Ukraine EgyptAir Flight MS804 crash is prequential to the US war on Egypt, by Scott

The US State Secretary John Kerry traveled on Wednesday May 18th to the presidential palace in Egypt. In news “The US secretary of state has held talks with the Egyptian president in Cario on the country’s political situation and peace proposals for the region, including the Israeli-Palestinian conflict.” Translating from the political doublespeak into English: The US and Israel tried to push Egypt to drop its support for the upcoming UN Palestine resolution. Israel has even tried to bribe the Egyptian leaders, by announcing during the meeting that “Israel may forgive half of Egypt’s $1.7b gas fine for a gas pipeline explosion in el-Arish, Egypt in July, 2012.” And this is very important: “Kerry: Egypt key regional partner by Jerusalem Post Israel News – ‎18 hours ago‎ Kerry’s brief visit fueled speculation that a behind the- scenes US-Egyptian-led peace process with Israel and other regional partners was in the works, which would circumvent the highly publicized French initiative to end the Israeli-Palestinian conflict. ”

Apparently, the US and Israel didn’t get what they want from Egypt, that’s why the passenger airliner went down in a suspected “terror attack.”

Et hint om hva dette handler om:
Is the crash of Egyptair Flight 804 linked to the France-led resistance against US escalation vs. Russia?
«US establishment is frantically trying to force European countries to approve missile systems aimed at Russia. They are desperate to entrap Europe into a military confrontation (with a soon-to-come provocation to light the fuse) with Russia. July is the deadline.»

Is the crash of Egyptair Flight 804 linked to the France-led resistance against US escalation vs. Russia?

Frankrike, USA og Russland(Putin) er på samme NWO Hollywood-lag(Irland-Potts) mener jeg. Dermed er dette nok et eksempel på splitt og hersk og psyops. Jeg tviler sterkt på om det finnes ekte vrakdeler og omkomne i denne saken, som så mange ganger tidligere:
I sum, alt det følgende bør peke i en retning. Bare å skumme raskt i gjennom alle linkene, som her er ”amputert” for ikke å bli filtrert i søpla, så ser en det.
Går en grundig til verks så peker det meste mot ritualer, egyptologi, triangler og frimureri, irske(Scotia) familienavn, faraoer og guder.
Et eksempel:
What we know so far about the people who were on board EgyptAir Flight 804
By Hailey Branson-Potts
• Egypt
http://www.latimes.com/world/la-fg-egyptair-victims-20160519-snap-htmlstory.html
av erfaring er journalisten med på ”leken” så her er det bare å snuse på mer:
https://muckrack. com/hailey-branson-potts
Navnene Branson og Potts fører meg til så mangt, også 22/7, men det blir for omfattende å gå inn på her. Bare ett hint:
«It was when the “the Illuminati” was name-checked by mainstream news gatherers and primetime television, and not only by the usual bunch of rappers and singers, but actors, actresses and their equally famous (and suspect) friends and associates too, including business figures such as Sir Richard Branson. The ‘Virgin’ boss made his voice heard on the subject in no uncertain terms in May last year when he appeared alongside Hollywood star, Olivia Wilde, and U2’s Bono in a campaign-ad for ’Water.org,’ a charity co-founded by Matt Damon which, according to its official website, “believes everyone in the world should have sustainable and affordable access to safe water and sanitation,” although the majority of its projects are focused on some of the most vulnerable regions of Africa and Asia. In February 2013, the ‘Bourne Identity’ actor released a short ‘YouTube’ video of himself holding a mock news conference in which he announces that he will not visit the bathroom until every person in the world has access to clean water and a toilet. It ends with an appeal for viewers to visit the charity‘s web-page, ‘StrikeWithMe.org.‘ Commenting on the spoof, he told the ‘LA Times’ that he hoped it would “generate new levels of awareness and participation in the cause.” The May campaign-ad featuring Branson, Bono, and Wilde was a follow-on to that. However, for some mind-boggling reason, all three of them – with the exception of Damon who also briefly appears – are shown jokingly referring to their supposed membership in “the Illuminati” for a significant chunk of it. What relevance this has with regards to the charity’s message is anybody’s guess – assuming there’s even a connection of course. Is it meant to be a stab at ‘comedy’ or ‘satire’? Perhaps it’s a bid to trivialise and/or ‘normalise’ the goals of the New World Order Plan within mainstream consciousness? What is quite clear is that it’s partly an attempt to reject and ridicule the growing number of us who seriously believe that such an agenda does exist.»
Les mer: https:// conspiromedia.wordpress.com/tag/richard-branson/
https://en.wikipedia.org /wiki/Richard_Branson
https://goo.gl/UJc6eP
-Egypt Air logo of Horus the Falcon god.
The crash of Egypt Air flight 990 out of New York in the early morning hours of October 31st, 1999 has sparked a huge amount of interest and speculation in both the general media and in relation to our «November 7th» scenario.
http://www. enterprisemission.com/egyptair.htm

Samar Ezzeldin, 27, was identified as a flight attendant on Egyptair flight 804
http://twitter. com/fbnewswire/status/733415791744278538/photo/1
A flight attendant on the tragic EgyptAir flight MS804 had posted a picture of a plane crashing, months after she got a job with the airline.
Samar Ezz Eldin, 27, uploaded the haunting image onto Facebook back in September 2014.
It shows a female flight attendant in wet clothes pulling a suitcase out of the water as a plane plunges into the sea behind her.
http://metro. co.uk/2016/05/20/egyptair-crash-flight-attendant-posted-picture-of-plane-crashing-on-facebook-5894480/

Malaysia Airlines “Lose Yourself” Ad Hoax
On March 16th, an alleged full-page advertisement for Malaysia Airlines with foreshadowing tag lines like “lose yourself on a journey of epic proportions” and “where you go / no one will ever know” began circulating on Twitter.
http://i1.kym-cdn. com/photos/images/newsfeed/000/718/837/509.jpg

For min del alt i orden Amatør1 eller to? (Amatoer1)

In this case the drill is named Phoenix Express, it started two days ago and continues until May 27th and involves the naval forces of “Algeria, Egypt, Greece, Italy, Malta, Mauritania, Morocco, Spain, Tunisia, Turkey and the United States, representatives from the NATO Shipping Center, the International Organization for Migration (IOM) and the EU border management agency Frontex are taking part.”

The Disappearance of Egypt-Air Flight 804.

The safety record of Egypt Air is replete with serious disasters with the loss of all on board Flight 990 after it inexplicably plunged into the ocean in the year 1999 the most serious incident closely followed by the 1985 terror attack that left 59 people dead on EgyptAir Flight 648 after the plane was hijacked by terrorists and later stormed by Egyptian Security forces.

EgyptAir Flight 990 (MS990/MSR990) was a regularly scheduled flight from Los Angeles International Airport, United States, to Cairo International Airport, Egypt, with a stop at John F. Kennedy International Airport, New York City. On 31 October 1999, the Boeing 767 operating the route crashed into the Atlantic Ocean about 60 miles (100 km) south of Nantucket Island, Massachusetts, killing all 217 people on board. The official «probable cause» of the crash was deliberate action by the relief first officer

The hijacking was attributed to the Abu Nidal group, a supposed Palestinian group, but it has since emerged that Abu Nidal was simply a mercenary operating on behalf of Israel and also the United States. It is also widely believed that Israeli intelligence was responsible for the loss of Flight 990 but the evidence to support the claim has never been provided.

Flight 990 appears to have been the first case of the remote hijacking of a passenger jet, a seemingly regular occurrence in recent years.

That disaster was blamed on the familiar but completely ludicrous pilot suicide theory resuscitated laughably last year for the German Wings disaster and also equally ludicrously widely presented as the cause for the disappearance of MH370 the previous year.

The pilot of the doomed EgyptAir flight spoke to air traffic control in Egypt for several minutes just before the plane crashed, a French television station has claimed.

M6 said that the pilot told Cairo control about the smoke which had engulfed parts of the aircraft and decided to make an emergency descent to try to clear the fumes.

This account directly contradicts the official claim that there was no distress call from the plane.

You can forget the Israelis – the incident was clearly caught by an NRO bird. If it had been an Israeli Dolphin class SSK the Israel-hating Obama Administration would be all over Jerusalem like a rash. They would never hear the end of it. It would be King David Hotel times ten. 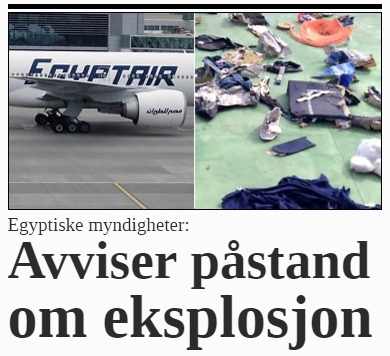 EgyptAir Flight MS804 – What The Media Won’t Tell You

“The head of Egypt’s National Air Navigation Services Company is challenging that account. Administrative board chairman Mohi El-Din Azmi told Egyptian state-run media Al-Ahram on Sunday that the plane did not swerve or lose altitude before it disappeared off the radar.”

As mentioned previously 2014, both the MH370 and MH17 catastrophes lead the 21WIRE to uncover the origin of the Beoing Uninterruptible Autopilot:

“The Boeing 777 along with other Boeing models [including the A320] can in fact be flown remotely through the use of independent embedded software and satellite communication. Once this advanced system is engaged, it can disallow any pilot or potential hijacker from controlling a plane, as the rooted setup uses digital signals that communicate with air traffic control, satellite links, as well as other government entities for the remainder of a flight’s journey.”

“This technology is known as the Boeing Honeywell ‘Uninterruptible’ Autopilot System.”

After the 9/11 attacks on the Pentagon and World Trade Center, President George Bush called for the creation of remote control systems to be placed within commercial airliners in the event of an emergency. This new technology would grant air traffic controllers along with other government agencies control over an aircraft – for its final intended destination.

Remote ‘fly-by-wire’ technology has been possible with large-scale airliners (Boeing 720’s) since at least 1984. Based on history, evidence suggests Flight Management Systems within Boeing models were capable of remote flight well before Bush’s politicized decree following 9/11.

On October 6th, weeks before the ‘vanishing’ and apparent act of terror on October 31st, involving Metrojet Flight 9268, a Russian Airbus A321 carrying some 224 passengers, Egypt expressed support over Russia’s military intervention in Syria – something which may have put Egypt in the crosshairs of the West. The following report was from Al Arabiya News:

“Egypt stands unwavering in its support of Russia’s military intervention in Syria, a stance that reflects the strength of relations between the two countries, but also raises questions on Cairo’s policy towards the Syrian crisis.»

Another intriguing aspect to this recent EgyptAir mystery, is the fact that NATO member nations conducted a rather large Mediterranean Sea drill from May 17th-May-27. The International Phoenix exercise was just two days in to military drills when MS804 went missing from radar.

There are serious questions surrounding EgyptAir Flight MS804. The world is still waiting for some real answers.

“Gaslighting as an abuser’s modus operandi, involves, specifically, the withholding of factual information and its replacement with false or fictional information designed to confuse and disorientate. This subtle and Machiavellian process eventually undermines the mental stability of its victims reducing them to such a depth of insecurity and identity crisis that they become entirely dependent upon their abuser for their sense of reality and even identity.”

This subtle and Machiavellian process eventually undermines the mental stability of its victims reducing them to such a depth of insecurity and identity crisis that they become entirely dependent upon their abuser for their sense of reality and even identity.